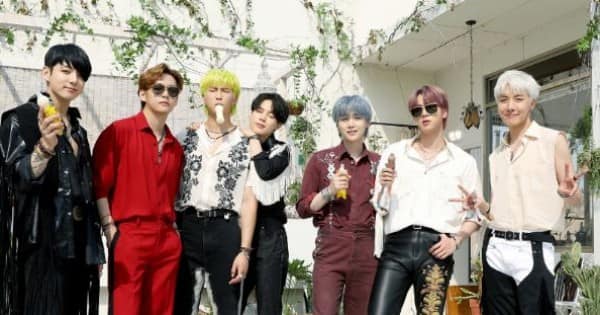 While ARMY loves the blockbuster performances of BTS aka Bangtan Boys, they also shower love on the band members for their cute banter and bond with each others. In many of the videos, we saw the members pulling each other’s leg, which bring a huge smile on our faces. Well, in an interview we saw a great banter between the boys, when they were asked who they want to tag as the mother, father and grandfather of the group. Also Read – BTS member Jimin REVEALS the secret that makes his dance moves more dynamic and desi ARMY will find it truly relatable

When asked “Who’s the father? Members voted for Suga. In fact, Suga himself raised his hand and said that he is one who always helps in fixing the problems whenever something happens in their dorm. When asked about the mother of the group, they picked J-Hope, which left him in splits. The members said that J-Hope “nags like a mom and Suga agreed to that. Later, the group selected RM as the grandfather because he is the leader of them and “biggest in the dorms like a grandfather.” Also Read – BTS: Alice actress Kim Hee Sun is concerned about her daughter being a Jungkook fan – here’s why

BTS is currently basking the success of their latest track Butter, which turned out to be a global chartbuster. Recently, Jungkook spoke about their next song after Permission To Dance and said, “The reason we’ve released the songs and album up to this point is that they were thoughts, emotional states or trends about us at that time, so it was just that. All those songs were born in line with that generation [of emotions, thoughts, feelings].” Elaborating his answer, he added, “Just like we did then, what we can talk about now, what we should talk about now, as we contemplate these things and talk amongst ourselves, perhaps naturally, a good song or a wonderful song will come out.” Also Read – BTS: ARMY demands military service exemption for Bangtan Boys; K-pop band comes up with a heart-winning reply