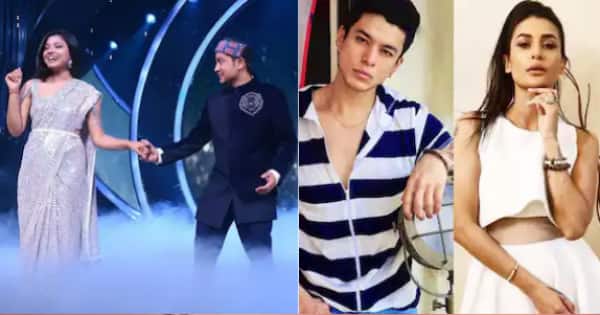 Hola friends, it’s almost evening, meaning, time to update y’all with the trending TV news of the day. As y’all know, Bigg Boss OTT has already commenced and hence, there are several reactions that are being dished out by the celebrities about the episodes. Other than that there were several newsmakers today. Let’s check them out here: Also Read – From Shah Rukh Khan to Deepika Padukone: THESE Bollywood celebs were ACCUSED of hurting religious sentiments

Indian Idol 12: Pawandeep Rajan opens up on his bond with Arunita Kanjilal

Now that Indian Idol 12 is inching closer to the finale, the contestants are getting very emotional. The show began last year in November. And having spent about 10 months together, they have become a close-knit family. Recently, in an interview with a portal, Pawandeep Rajan opened up on his bond with Arunita Kanjilal. The singer said that he wants to remain friends with her all his life. Also Read – Will Alia Bhatt, Priyanka Chopra, Katrina Kaif’s Jee Le Zaraa be able to break the box office records of these male-dominated blockbuster multi-starrers?

Ain’t nobody as big a fan of Bigg Boss as Gauahar Khan. The season seven Bigg Boss winner has been ardently following Bigg Boss throughout. She recently watched the first episode of Bigg Boss OTT and had a comment to make. She asked fans whether anybody spotted a control freak inside the house. Fans were speculating between BBOTT contestant Divya Agarwal and Pratik Sahejpal.

Check out the story here: Bigg Boss OTT: Gauahar Khan takes a dig at the ‘control freak’ of the house? Fans left wondering whether it’s Divya Agarwal or Pratik Sehajpal

Disha Parmar and Rahul Vaidya recently attended an event in the city. And during a press conference, Disha Parmar was asked whether she is a part of Bade Achhe Lagte Hain 2. And the actress had an interesting response that will leave fans excited for Nakuul Mehta and her reunion.

Bigg Boss OTT contestant couldn’t stop praising Yeh Rishta Kya Kehlata Hai actor and her friend Mohsin Khan. BollywoodLife.com got in touch with the actress. We asked her about her experience of working on the Rajan Shahi show. Urfi revealed that she has been friends with Mohsin ever since she came to Mumbai.

It is a known fact that Pratik Sahejpal and Pavitra Punia dated in the past. They had a very nasty breakup it seems. Recently, Pratik had addressed his breakup with Pavitra Punia on national television at the premiere night episode of Bigg Boss OTT. Pavitra was recently asked about the same. She refused to comment on the same.

Check out the whole story here: Bigg Boss OTT: ‘God Bless Him,’ Pavitra Punia REACTS on her ex Pratik Sehajpal referring to their relationship as toxic

In the first episode of Khatron Ke Khiladi 11, Vishal Aditya Singh and Madhurima Tuli‘s frying pan incident was recreated. It caused a major controversy and even Madhurima had slammed the channel for the same. Now, while exclusively talking with BollywoodLife.com, we asked Vishal about the incident. The actor refused to comment on it but said that he is past that incident now.

Check out the exclusive story here: Khatron Ke Khiladi 11: Vishal Aditya Singh speaks up about the recreation of the frying pan incident on the show [Exclusive]

Mann Kee Awaaz Pratigya actor Anupam Shyam’s brother revealed that the late actor was upset with Aamir Khan. It so happened that Shyam had reached out to Khan for help. But after promising, he allegedly did not pick calls. Anurag Shyam told Aaj Tak, “Anupam Shyam was upset that he could not meet their mother when she was ill. She was in Pratapgarh at the time and the actor could not go because the Uttar Pradesh town had no dialysis centre. He even went to Aamir Khan for the same and he assured him. But later he stopped picking calls after few months.”

Ekta Kapoor took to her Instagram handle and shared a video of her interaction with the OG stars of Bade Achhe Lagte Hain, Ram Kapoor and Sakshi Tanwar. The TV Czarina revealed why she did not approach Ram and Sakshi for the new season. It was a fun chat session. Check out the video here:

Happy birthday, Hansika Motwani: From a cute kid in Koi Mil Gaya to a super-hot womaniya, 7 pics that chronicle the actress’ transformation