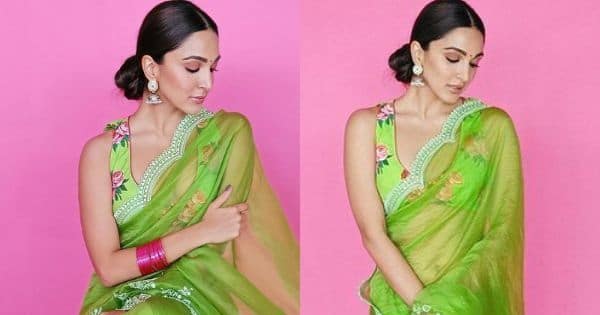 Kiara Advani is all geared up for the promotions of Shershaah. In the film, she plays the role of Late Captain Vikram Batra’s fiancee, Dimple Cheema. Kiara Advani is known as a fashionista and never fails to amaze us. The actress is loved as a simple Indian girl as we have seen in Kabir Singh. People could not get enough of Preeti. Her role as Dimple Cheema is also on similar lines. We can see that she is dressed in salwar kameezes in the song, Rata Lambiyaan. Now, she has posed in a green organza saree that costs Rs 48,000 for the promotions. The actress is looking stunning. Also Read – Rhea Chakraborty, Alia Bhatt, Disha Parmar and more celebs from Bollywood and Television industry were trolled this week – find out why

The saree worn by the saree was from a brand called Torani. The fashion house specialises in vintage designs with a dash of contemporary. The item worn by Kiara Advani is an Angoori Farrin saree. The saree is made of organza and has machine embroidery done on it with white thread. Kiara paired the saree with a sleeveless blouse that had floral prints. The actress wore the saree with silver jhumkas and pink glass bangles. She tied her hair in a bun. Keeping the makeup simple, Kiara Advani opted for kohled eyes and lots of mascara. A pop of nude pink lipstick and some blush made her look prettier. It was an Indian girl look, so we had a small bindi as well. Also Read – From Aamir Khan to Farhan Akhtar: B-Town celebs who underwent rigorous training and shocked everyone with their transformations

Janhvi Kapoor was quick to praise her look as ‘Stunnnnning,’ while Bhumi Pednekar felt that she was so pretty. Even Tanya Ghavri, the famous stylist was left gushing on her look. In the movie, she plays the role of Dimple, the girlfriend of Captain Vikram Batra. The song Rata Lambiyaan is getting a lot of love from fans. As we know, Sidharth Malhotra and Kiara Advani are rumoured to be dating. Also Read – These HOT AF pics of Bhumi Pednekar makes us want to see her in an out-and-out glamorous role