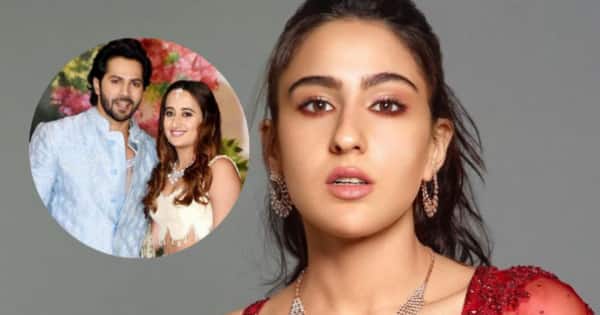 Sara Ali Khan is one quirky young belle. She often shares posts with quirky shayaris that she writes with unique rhyme. Her posts are funny and witty at the same time. And now, Sara is upto another antic. The Simmba actress wants to prank her Coolie No. 1 co-star Varun Dhawan and his designer wife, Natasha Dalal. And her idea of a prank is bizarre and inspired by her Abba and Amma, Saif Ali Khan and Amrita Singh. So, in a recent chat show, Sara Ali Khan revealed how her mom and dad would prank their friends all the time. She revealed that they (Saif and Amrita) would smear boot polish on their face and scare their friends. And Sara wants to follow the same route, well, blame them, genes. Also Read – Filmy Friday: Throwback to when Saif Ali Khan injured his forehead in a nightclub brawl – here’s why

Narrating one incident, Sara Ali Khan shared, back when Saif and Amrita were married to each other, they decided to prank their mutual friend. Saif and Amrita smeared the polish on their face and entered their friends’ room. “Ain waqt par mere father ne darwaza khola, meri mom ko andar daal diya aur darwaza bandh kar diya (My father opened the door of the room, pushed my mother inside and shut her in). So, now, my mom was in Neelu Merchant’s bedroom, while Neelu was asleep with her husband, and Neelu’s husband would have shot my mom. But my mom put her hands up and started screaming, ‘Don’t shoot, it’s Dingy,'” Sara shared on Feet Up With the Stars. She then added that she wants to pull the same prank on someone once and those who know her would know that she is capable of doing so. Also Read – Sara Ali Khan reveals why she doesn’t want to live with dad Saif Ali Khan but with mom Amrita Singh

She added that she would love to prank Varun though he would be ‘just humoured by it’. She said, “But I think it would be fun. Yeah, Varun and Natasha. Just showing up with boot polish in their room and screaming. Yeah, that would be kind of fun.” Also Read – Amrita Singh, Poonam Dhillon, Padmini Kolhapure – these 9 actresses who ruled hearts in the 80s have aged like fine wine

What do you have to say about Sara Ali Khan’s idea of a prank? Let us know by tweeting @bollywood_life. On the work front, Sara has Atrangi Re with Akshay Kumar and Dhanush. On the other hand, Varun has Bhediya with Kriti Sanon and Jug Jugg Jeeyo with Kiara Advani, Neetu Kapoor, Anil Kapoor and Prajakta Koli.