Sanjay Dutt’s eldest born Trishala has turned 33. The young lady celebrated the day with a road trip in Los Angeles, California with her Daddy Dukes Sanjay Dutt. Today, she posted a picture with her father. We can see her in a white dress while he is in a printed shirt and shorts. She captioned it, “Chapter 33 with my heart, my blood, & my soul – The sun, the moon, & all my stars my Papa Dukes @duttsanjay – thank you everyone for the birthday wishes.” This birthday was a father-daughter bonding time for Trishala. They did a road trip in the Los Angeles. Maanayata Dutt was all hearts for the picture. Also Read – Throwback Thursday: When Sanjay Dutt lied to his kids Shahraan and Iqra that he was ‘shooting in the mountains’ while in fact he was in jail – watch video 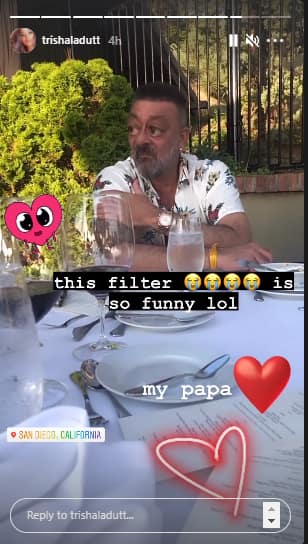 Also Read – Happy Birthday, Sanjay Dutt: Take this simple quiz to prove you are indeed a die-hard fan of our Munna Bhai

Paresh Ghelani, who is one of Sanjay Dutt’s closest friends also accompanied them on the trip. Vicky Kaushal played the role of Paresh in Rajkumar Hirani’s Sanju and people loved the character. Sanjay Dutt penned a warm message for his first born, Trishala. He wrote, “Life gave me the most wonderful gift in the form of you when I became a father. Even though you live so far away, we know that our bond has just been growing stronger. Happy Birthday, my little girl.” We can see a little Trishala in her arms. She looks so cute. Also Read – Birthday Special: Unknown and shocking facts about Sanjay Dutt’s life that we didn’t see in the actor’s biopic Sanju

Trishala Dutt is Sanjay Dutt’s first child born to Richa Sharma and him. Her mom passed away when she was a kid. The young lady has been raised in the US by her grandparents. She lost her boyfriend a couple of years back. Sanjay has twins Shahraan and Iqra from his current partner, Maanayata Dutt. The kids’ social media accounts were made public of late. Sanjay Dutt is awaiting some big budget flicks like KGF 2 and Shamshera.

Suriya to team up with Bala once again?

Murungakkai Chips: Shanthnu talks about how the film is special to him