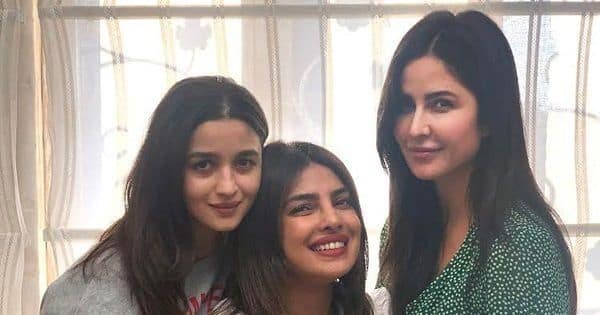 Farhan Akhtar is ready to don the hat of a director once again with Jee Le Zaraa starring Priyanka Chopra Jonas, Katrina Kaif, and Alia Bhatt in the lead. The film will be based on the lines of Farhan’s road trip films Dil Chahta Hai and Zindagi Na Milegi Dobara extending the genre to girls this time. And while the announcement has left the fans quite excited, Priyanka has now detailed out how Jee Le Zaraa happened. Also Read – Katrina Kaif, Priyanka Chopra Jonas, Alia Bhatt’s Jee Le Zaraa and more upcoming Bollywood multi-starrers that we cannot wait for!

Sharing a lovely picture with her co-stars Alia and Katrina, Priyanka talked about how they casually discussed the idea of making a film on road trip with an all-female cast back in 2019. The idea then materialized into a movie and it took nearly 3 years for Priyanka, Alia and Katrina to align their schedule to work together in Jee Le Zaraa. Also Read – #RC15: After Alia Bhatt, Kiara Advani becomes the second-highest paid actress for a Telugu film?

“Let’s rewind, to me musing about wanting to do another Hindi movie ASAP, on an unusually rainy night in Mumbai in Nov 2019. But it had to be the right one – different, cool, never been done before… I thought. The idea grew into a movie helmed by an all-female cast. There are not enough Hindi movies that are female multi-starrers. This led to an impulsive phone call… to my 2 real friends about this idea that involved 3 on-screen girlfriends. A celebration of friendship we called it!!” she wrote on Instagram. Also Read – Netizens troll Alia Bhatt for PDA with Ranbir Kapoor as they bring back her old video and pictures – Watch

She continued, “Katrina, Alia, and I enthusiastically met in February 2020 (as seen in this picture), just before the world shut down, to discuss who we could trust to bring this vision to life for us and our choice was unanimous… Farhan and Ritesh, Zoya and Reema. We had all worked with @excelmovies and @tigerbabyfilms individually so this seemed perfect. It just so happened that Farhan was working on a female road trip movie at the same time! Talk about all the stars aligning!!

“And here we are today… #JeeLeZaraa… it only took 3 years to align all our schedules but we stuck together and got it done! This one is to sisterhood… to friendship and to breaking the mould!! Can’t wait to get on the road with Aloo and Katty. My heart’s smiling. See you at the movies.”

Farhan shared the motion poster of Jee Le Zaara on his social media on Tuesday with an interesting retrospective video. The video shared glimpses of his previous films Dil Chahta Hai and Zindagi Na Milegi Dobara based on road trip chronicals. The film is produced by Excel Entertainment and Tiger Baby. The announcement came a day after Excel Entertainment completed 20 years. It is written by Zoya Akhtar, Farhan Akhtar, and Reema Kagti, produced by Reema Kagti, Zoya Akhtar, Ritesh Sidhwani, and Farhan Akhtar. It will be released in 2023.