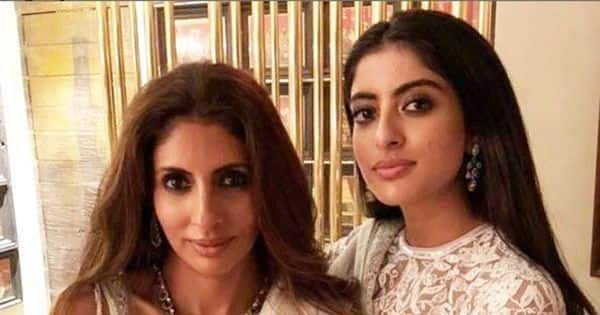 Amitabh Bachchan‘s granddaughter Navya Naveli Nanda is no stranger to trolls. Time and again, she has been subjected to online trolling but she revealed that she has chosen a dignified way to ignore such negative comments. However, there was one instance when Navya was agitated when a troll asked what her mother Shweta Bachchan Nanda does for a living. Also Read – Chehre: The Amitabh Bachchan-Emraan Hashmi-Rhea Chakraborty starrer gets a new release date – deets inside

When Navya was asked how she deals with trolls on her Instagram page, she said that she usually ignores them but chooses to respond when it really hits her nerve. “I remember there was one specific comment that I got really upset about. I had given an interview about how my mom inspired me a lot because she is a working woman. Somebody commented, ‘but what does she do?’ My response to that was that she is a mother and that’s a full time job itself,” she told Her Circle. Also Read – Navya Naveli Nanda says her nani Jaya Bachchan ‘has always been very unapologetic, unfiltered, and has a spine’

Navya further talked about how it is fundamentally so wrong to not appreciate moms who have been working day and night raising a generation. “We believe that just because they are not running an empire or a billion dollar company that their work is not important. But they are responsible for raising a generation of people who will hopefully not look down on them,” she added. Also Read – Trending South News Today: Sonakshi Sinha to make her Tollywood debut opposite Chiranjeevi, Rashmika Mandanna’s first interaction with Amitabh Bachchan and more

In the past, when the Instagram user had posed a question on her mother, Navya had replied, “She’s an author, writer, designer, wife, and mother.” She had also taken to her Instagram stories to share a note which reads, “Being a mother and a wife is a full-time job. Please don’t discredit women who are homemakers. Their role is so crucial in the upbringing of a generation that will hopefully support their contribution instead of tearing it down.”

In the same interview, Navya called her nani Jaya Bachchan her biggest source of inspiration. She also said that her nani is her go-to person whom she can share anything and everything with.

Netrikann: After Nayanthara in Tamil and Sonam Kapoor in Hindi, now Anushka Shetty roped in for the Telugu remake?

Exclusive! Sahher Bambba On Her Character, Preparations, Upcoming Projects And More: Details Inside