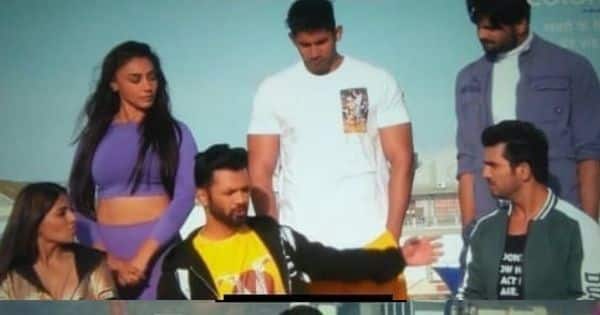 The new episode of Khatron Ke Khiladi 11 will bring about new drama and amazing stunts. It will be a teamwork episode. The contestants have been divided into two teams. Rohit Shetty reveals that Shweta Tiwari and Rahul Vaidya will be the captains of the teams. Rahul Vaidya’s team includes Vishal Aditya Singh, Arjun Bijlani, Varun Sood, Mahek Chahal, and Nikki Tamboli. Shweta Tiwari’s team includes Divyanka Tripathi Dahiya, Aastha Gill, Abhinav Shukla, Sana Makbul and Anushka Sen. Let us take a look at the highlights of tonight’s episode. Also Read – Khatron Ke Khiladi 11: Nikki Tamboli REVEALS who according to her is the winner of the show [EXCLUSIVE]

Four team members of each team will play the game together. One team has to walk on a plank tied at a height while the other teams will be in drums and will dislock themselves to push the opponent and make them fall before they reach the other end and remove the flag. First Rahul’s team is in drums and Shweta’s team has to walk the plank. Three members from Shweta’s team complete the stunt. Rahul’s team members also complete the stunts with just one person falling. However, Rahul’s team completes the stunt faster and hence they get 10 points. Also Read – Rubina Dilaik stuns in a monokini as she chills on a Goa beach with hubby Abhinav Shukla – see pics

It is finally a stunt with the reptiles and it is Nikki who has to play from Rahul’s team. Her fear of reptiles and insects makes the team worried. She starts crying even before trying the stunt. Nikki aborts the stunt leaving Rahul and his team disappointed. Anushka begins the stunt and completes it.

Rohit Shetty gets angry at Nikki for aborting the stunt. He tells her she needs to understand that she is privileged. He makes her realise that five other people are dependent on her. He tells her that this is disrespect towards her profession. Rohit Shetty says that Sourabh Raaj Jain was better than her in every way.

‘Selmon Bhoi’: Game Based On Salman Khan’s Hit And Run Case Gets In Trouble, Temporarily Blocked

Bigg Boss OTT: Karan Johar wants Ranveer Singh to co-host the show with him – here’s why