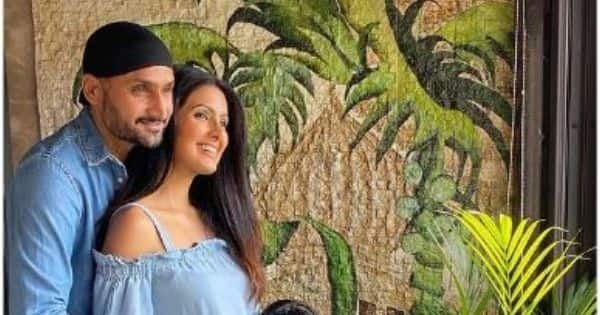 Geeta Basra and Harbhajan Singh welcomed their second child Jovan Veer Singh on July 10. However, did you know that the actress had two miscarriages before this? She told ETimes in a recent interview that Jovan was a rainbow baby. For those of you who don’t know, rainbow baby is referred to a child born to a family who has previously lost a baby due to stillbirth or miscarriage. Also Read – Harbhajan Singh and Geeta Basra papped outside the hospital as they take their newborn child home — view pics

Geeta said that women should not lose hope and suffer in silence yearning for a child. “I want to talk today. I want to tell those women who have had miscarriages and lost hope to pick themselves up again,” she stated. She added that they should not give up and suffer in silence yearning for a child. “Yes, a miscarriage can have a terrible effect on you from which you might take a long time to come out. A couple of my friends have had miscarriages. But we as women have to learn to put this behind us in the quickest possible time,” said Geeta. Also Read – It’s a boy! Geeta Basra and Harbhajan Singh welcome their second child

She continued, “The last two years have been traumatic for me no doubt but I held myself from breaking down.” Geeta went on to say that a woman’s hormones after a miscarriage go up and down a lot, which, in turn, makes it extremely difficult for her to maintain her composure. The actress said that she kept herself strong and did not allow that meltdown to happen. Also Read – Anushka Sharma, Hazel Keech and more Bollywood actresses who married Indian cricketers – view pics

Geeta also said that before marriage she was sure she wanted to have two kids and said that it is important for a girl to have the “right support system”. She revealed that she shifted to Punjab where her in-laws stay after her miscarriages and got pregnant for the fourth time while she was there.

She decided to completely rest it out in the first trimester. “I just took my vitamins and waited for the first three months to get over.” She said that she came to Mumbai after that, and a little later, took to yoga. “That helped me a lot. Long works in the last trimester were a given. My gut instinct told me that this time all will go well. Touchwood, it did,” Geeta said.

Geeta Basra and Harbhajan Singh tied the knot in October 2015 in Jalandhar. Their first child Hinaya Heer Plahain was born in July 2016.