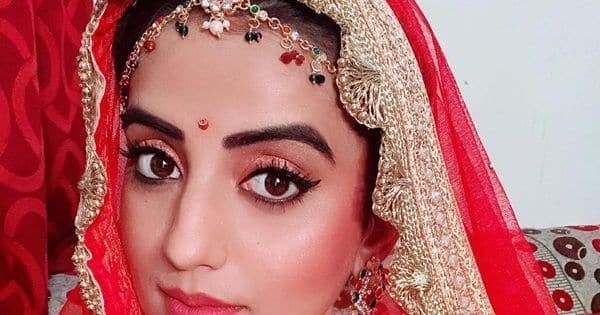 Filmmaker Karan Johar is all set to host the controversial reality show Bigg Boss OTT for the six-week run. It will stream on Voot from August 8. After the completion of the digital version, the show will move to Colors with the launch of Bigg Boss 15, hosted by Salman Khan. The list of the contestants is already out and Akshara Singh is one of them. Also Read – Bigg Boss OTT: Netizens are on a roll as Shamita Shetty participates on Karan Johar’s show amidst Raj Kundra controversy

Akshara is a popular name in the Bhojpuri industry. She often garners attention on social media with her girl-next-door looks. She has delivered hits in Bhojpuri films like Pran Jai Par Vardan Na Jai (which also marked her debut in Bhojpuri), Tabadla, Mai Ke Karz among others. She has even lent her voice to some of the songs from Bhojpuri album Dil Bole Bam Bam Bam. She has also hosted singing reality show Zila Top on Mahuaa TV. Also Read – Bigg Boss OTT Twitter Reaction: Pratik Sahejpal’s fiery attitude garners mixed reaction; netizens declare Ridhima Pandit as the winner

She had made headlines for her alleged marriage, which the actress had later denied. Pictures of her and actor Arvind Akela Kallu dressed as bride and groom taking pheras and sitting in a mandap had gone viral in 2019. Later, it came to light that the pictures were from the shoot of their film directed by Chandan Upadhyay. Also Read – Bigg Boss OTT: Shamita Shetty, Pratik Sahejpal, Divya Agarwal and more – check out the OTT contestants and their personalities here:

Akshara is also a rage on social media and it remains to be seen if she will be able to take the internet by storm with her stint in Bigg Boss 15.

WHAT! BTS boys beat Reese Witherspoon, Chris Hemsworth to become the most loved artists on Twitter

Saani Kaayidham: Arun Matheswaran wraps up his second before his first release