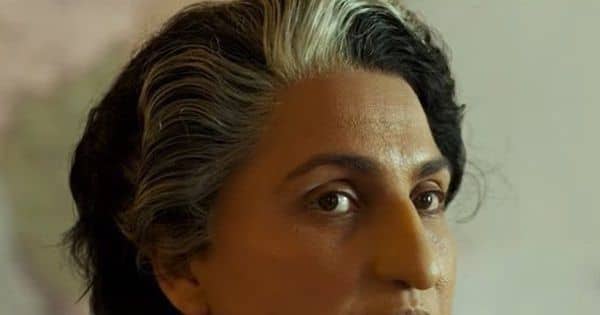 The much-awaited trailer of Akshay Kumar‘s espionage drama Bell Bottom was unveiled on Tuesday and fans have been going gaga over its cinematography and breathtaking visuals. Akshay looked impressive as the RAW agent in the trailer but the one actor who shocked each and everyone, was none other than Lara Dutta who left her fans jaw-dropped with her epic transformation as the former Prime Minister Indira Gandhi. Also Read – The Kapil Sharma Show: Akshay Kumar to be the first guest on the show? Here’s what we know

It took a while for social media to spot Lara in the film’s trailer. And when they did, social media went berserk on how Lara looked completely unrecognisable in her role of Indira Gandhi. Fans hailed the makeup artist and even suggested that the artist should be honoured with a National award for his amazing work. They also praised Lara for her portrayal of the then PM. Also Read – Akshay Kumar reveals he watched THIS Amitabh Bachchan blockbuster by buying a ticket in black

OMG this is #LaraDutta our Miss Universe??.. she nailed it.. looking forward for this movie..
#BellBottomTrailer pic.twitter.com/56xyul28d6

OMG ? is she #LaraDutta ?? unrecognizable… next level makeup.. the makeup artist deserves an award for this outstanding work.. pic.twitter.com/iuE32y5E50

Speaking about being cast as Indira Gandhi in Bell Bottom, Lara said that she just got a call from the makers and they told her that this film is being made and they are casting for this role even before she heard the script. And she instantly agreed to play the role since it was an opportunity of a lifetime and a great responsibility to play the late former Prime Minister on the big screen. Also Read – Trending Entertainment News Today – Akshay Kumar calls Bell Bottom’s release a gamble; Katrina Kaif reveals she’s dating Vicky Kaushal?

“It is a great responsibility when you portray someone who’s an iconic figure like Mrs Gandhi. It was very important to get her body language right. Given the dramatic events that were unfolding, she was extremely centred. It was important therefore to portray her in that way. As a result, a lot of homework and research went into the role. It was an opportunity I am very thankful for,” the 46-year-old actress said at the Bell Bottom trailer launch.

Bell Bottom, incidentally, is set in 1984, the year that saw Operation Bluestar as well as Mrs Gandhi’s assassination.

Annaatthe first look: Rajinikanth’s fans get Rajinified with his electrifying energy and cannot keep calm for his film